Now I don’t know about you but I was over the moon, jumping up and down for joy, excited when I heard about Bega releasing their Gluten Free Vegemite last year. Like I started stalking my local IGA and Coles in a hope they would release it onto their shelves! But hey, when you haven’t had something as iconic and Aussie as vegemite in many, many years, you’d be pretty excited too. So it shouldn’t really be any surprise then, that I had my brand new jar of gluten free vegemite in my hot little hands for all of 5 minutes when I realized I HAD to make some Gluten Free Cheese & Vegemite Scrolls! I mean really…. how could I not!

Now don’t hate me. But I actually don’t hate being gluten free, most of the time anyway. In general I don’t really feel like I’m missing out. Though that probably has a lot to do with my own baking. On the odd occasion, like at a friends wedding, I feel a bit bummed that I can’t enjoy the festivities fully. But overall I don’t feel like I’m missing out on much…. except you know, joy.

Having said that there really is something special about vegemite. Just like double chocolate coated Tim Tams. Maybe its the Aussie thing. Maybe it’s so deeply ingrained in us that we feel un-Australian not eating vegemite and the mere thought of it makes us sad! Either way, it kills me every time I have to butter a piece of toast for my son and then smother it in vegemite. I may, on the odd occasion, simply hover over it for a minute or two, sniffing it. This tends to always warrant a hefty “Muuuummmmmmmmm!” though. If you’re a part of the Gluten Free Eating Perth Community on Facebook you’ll know we tracked the stock levels of Gluten Free Vegemite in just about every store in Perth when it first came out! Yes, we were that crazy. But like I said….. it’s a HUGE DEAL! Hell I even posted about it out here in the Wheatbelt (rural Western Australia) when I finally found some in Coles. Do you know how long I was stalking the shelves for?? No, best not I admit that. But you get my point.

So naturally the moment I finally got home with a jar I stuck two bits of gluten free toast in and pulled out the butter. It felt like an almost holy experience when I cracked the seal. I swear angels started singing as I spread that black goodness across my slab of butter. (It is the only way to eat it right?!). And did ya know? It tasted pretty much how I remembered it…. which was a while ago. So hey, who knows. But I don’t care! I’ve got me some vegemite so I’m a happy girl.


An Aussie icon, the Cheesymite scroll

Now if you’ve been hiding under a rock for the last, I dunno, 20 odd years? Christ it’s probably been longer. Then you’ll know and have likely experienced the simple joy of a Cheesymite scroll (as they’re affectionately called). For those of you who have no idea what I’m talking about, why are you on this page? But I’ll explain anyway.

A truly Australian invention (obviously), it was first baked by Brumby’s and Bakers Delight. A piece of bread dough is rolled flat, smothered with vegemite and cheese, rolled up again and baked in slices. Hey, I never said it was a delicacy! But this simple creation became a huge hit across the country. I even remember when it was the hangover cure of choice (ahem, I think my husband still might believe this!).

But none the less they became a staple. Home cooks, Mums, School canteens. Everyone got on board and the cheesymite scroll became legendary. So of course, on my vegemite high I needed some gluten free cheese and vegemite scrolls ASAP! I hate to admit it but I actually feel kinda bad about calling this a recipe. It was pretty much what I had laying around the house. It just so happened to work, really well, over and over and over again! But here we are and all you need is a handful of ingredients. Or rather a box mix of Simply Wize gluten free bread mix. Because, if you’ve ever read my blog before you’ll know I am all about easy!

I don’t believe gluten free baking should ever be too hard. Yes on the odd occasion sometimes it does have to be labour intensive and include some hard to find ingredients. But most of the time, it should be easy and fun.

So in the spirit of easy, you only really need 5 ingredients.... A packet mix of Simply Wize Gluten Free Bread mix, some vegetable oil, warm water, a jar of Gluten Free Vegemite and some grated cheese. Yup. That’s it. But if you don’t believe me just head below and check it out.

My go to and favourite Gluten Free Bread mix is the Simply Wize Crusty Bread. Not only does it make a mean loaf of bread, but I also use it in my cheat version of Gluten Free Hot Cross Buns!! Yes really go and check them out. But all we simply do here is mix in a little warm water, yeast and oil and voila! Fool proof gluten free dough. Smear on some vegemite and sprinkle over some cheese and you’re done! Or why not add some tomato paste, sliced ham and grated cheese for an easy gluten free pizza scroll!

This recipe really is too easy. Easy, albeit messy, to whip up. Quick to cook and easy to just grab and go. I even had a couple of gluten free cheese and vegemite scrolls for breakfast on my way to drop the kiddo at school.

Oh and don’t forget to bake an extra batch and freeze them! Wrapped individually they freeze and defrost beautifully, so you’ll never run out. I keep some on hand for lunch boxes, after school snacks or when I simply can’t be bothered.

So don’t just take my word for it folks. Grab yourself a packet mix, hop in the kitchen with the kids and get baking! 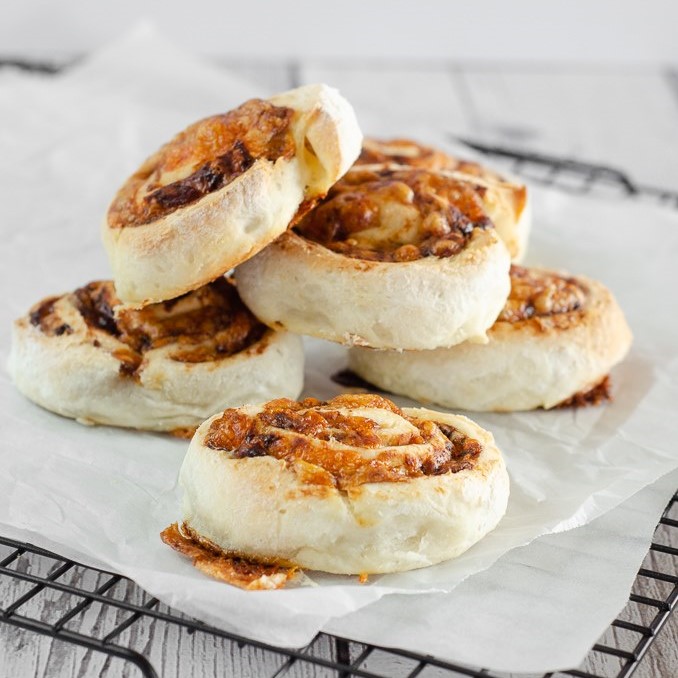 - I know you're going to ask if you can use other brands of bread mix to make this with, but I've honestly tried them all and they just don't work well. I find they go too tough or dry out very quickly without cooking all the way through. Trust me and buy a few boxes of the Simply Wize crusty bread mix at your next Gluten Free Expo or from your favourite online health food store!

- Don't be tempted to add too much cheese, too much cheese will bubble over too much and then burn! But for a tasty mix up try your favourite type of cheese. Mozarella would work beautifully here.

- Don't cut your scrolls too thick/wide either. They won't cook through in the middle.