There are few things more Australian than a Pavlova. Don’t you think? It’s just one of those desserts that, let’s face it, most of us grew up with. Grandmothers all over the country would whip this wonderfully simple dessert out for just about any occasion! And yet, often or not it is not actually made gluten free! I mean what a waste!! I wish more people knew how easy it was to make a gluten free pavlova. Because then we might actually have more dessert options when we go out. Now before we even get started, I don’t want you freaking out that this is actually a hard dessert to nail. Trust me, with a few simple and easy tricks, you’re going to be nailing your Gluten Free Pavlova every time!

Well now see, here’s the thing. Much like Ugg boots, the Kiwis and Aussies have been arguing over who created the humble pav forever! What we can agree on, is that it was during Russian ballerina, Anna Pavlova’s  tour of Australia and New Zealand during the 1920’s that it was created. Buuut that’s where things start to get murky. Was it a hotel chef in Wellington, inspired by the ballerina, that wrote the original recipe? Or was it in fact a chef working at The Esplanade Hotel, right here in Western Australia, that penned it first. Either way, the simple pavlova has become an icon in most of ours homes. And rightly so!! I don’t think I’ve ever met a person who hates pavlova!

At it’s core the gluten free pavlova is a simple meringue covered in fruit and clouds of cream. But I think we all know that it can be a touch trickier than that. Oh and let’s not even get started on just how many different variations to the recipe there are! It’s been discovered that there are over 600 versions of the pavlova recipe in existence! Seriously! How many ways can you change up whipped egg whites and sugar!! And yet, here we are. With my own recipe for gluten free pavlova joining the ranks. Pavlovas are a Family Tradition

So here’s the thing. I don’t normally make the pavlova in our family. It’s my husbands’ Grandmother’s job. Every Christmas, without fail. I bet you have one too, huh. That one person who solely makes the pavlova, no matter the occasion? Even my Mum said just the other day, that she doesn’t actually think she’s EVER made a pavlova because it was always the thing her best friend made and brought along to gatherings. It was that simple.

I think what it comes back to, is people perceive it to be a difficult dessert to make. All that whisking! Who knows what could go wrong! But after many years of watching other people make it, I’ve come up with a few little tricks of my own. And honestly I’ve never had a gluten free pavlova fail on me since.

The trick, I believe is in the first whisking of the egg whites. You need a clean bowl. And no I don’t mean fresh from the dishwasher kind of clean. I mean clean from even you touching it. You see the oils secreted by your skin can disrupt the floofing process. (Yes it’s a word. My word, just roll with it people!) So before you do anything, grab a piece of paper towel, soak a corner in white vinegar and rub it over the insides of your bowl and whisk. Now put it down and don’t touch it! It’s weird, but it works, trust me.

The other key is patience. Which is not something I’m normally known for. In fact I don’t think anyone has EVER used that word to describe me in my life. And yet, when it comes to baking, I am. So even though I know all you want to do is pull that freshly baked gluten free pavlova out of the oven. (and get it straight into your belly!) You must wait. Once the pav is finished baking, simply turn the oven off and crack the door open. Now don’t touch it for at least another hour. Seriously. Go do something else. Walk away from that kitchen folks!

And that it’s! Well OK there’s a few steps in between. But they’re simple, especially if you have a stand mixer. Oh and the whole gluten free part? Simply use gluten free labelled corn flour. That’s all! For a twist on the classic, pop your finished meringue mixture into a large piping bag and pipe smaller 10cm versions onto your baking tray. Bake at the same temperature, only for 35 minutes instead. Now you can make pavlova towers!!!


Now hop into that kitchen folks and whip yourself up a Gluten Free Pavlova for your next Summer get together. Because there are no two things that go together better than Pavlova and Summer.

The truly iconic Australian dessert, who doesn't love a good Pavlova! This perfectly crisp and chewy Gluten Free Pavlova is just like your grandmother used to make! 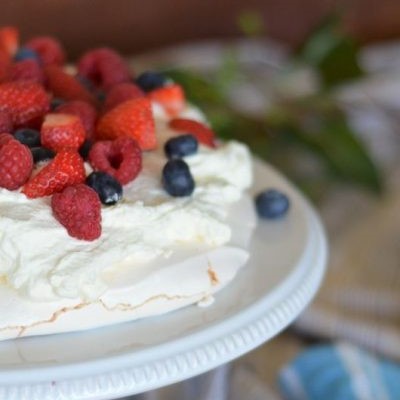 - If you won't be serving your pavlova straight away and instead want to store it overnight, I find the best place for it to be is back in the (turned off) oven on a tray. Don't put them in the fridge and I find storing in a Tupperware container tends to make them weep!

- To create a gorgeous Chocolate Pavlova, simply add 2 Tbsp of sifted Cocoa Powder and 1 tsp Vanilla Extract in with the cornflour and fold together. Bake as usual!

- Or why not make Mini Pavlova's instead! Then each guest can decorate their own however they like!