I think by now you may have realized that I’m one of “those” people. I LOVE Christmas. Like I mean, really, really LOVE Christmas. And I will find pretty much any excuse to start celebrating early. Be it the Myer Christmas window display going in, or those mellow tunes of Michael Buble’s Christmas carols coasting over the airwaves in every single shopping center. But what it generally is, is the fruit mince pies hitting the shelves in the supermarkets. (You know, in August!!). I love a good fruit mince pie. So naturally when I went gluten free many years ago I was gutted that I could no longer enjoy them. (I’m sorry, but the store bought GF variety just don’t cut it!) So this year, I took matters into my own hands. If only so I could say Christmas truly had come early. Enter my Gluten Free Fruit Mince Pies.


Homemade With Love…. and Brandy

What’s a serving of gluten free fruit mince pies without a good helping of brandy. In fact, what is any Christmas treat without a dash of brandy! Funnily enough, looking back through the history books (or Wikipedia) I realized they weren’t traditionally made with alcohol. And yes before anyone asks, they did originally contain beef. Hence the name mince pie. But to hell with tradition I say, or in this case anyway. It’s Christmas time! Which is pretty much my excuse for everything.

I do have a confession to make though. I’m not actually a huge fan of brandy, unless it’s in my Nan’s custard that is. So when it came to macerating my dried fruit mixture in booze I opted for rum instead. I’ve since learnt that rum is completely acceptable in Christmas baking and is often used in conjunction with brandy in fruitcake! So there you go. It had nothing to do with the fact that I actually had no brandy in the house and only a smidgen of my husband’s rum left…..

I also may have slightly overdone the whole “macerating” part. Normally I would say leave the fruit mixture to soak in rum/brandy overnight. Then bake your pies. Buuuuttt I kind of left it for a week! It just looked so good! Every time I went in to check on it I’d crack the lid and give it a stir and all those amazing aromas would come swirling out at me. And those plump little raisins and sultanas would just keeping getting fatter! Gaaah! It all looked so good that I just couldn’t resist myself, well, actually I suppose I could resist it. Which is so unlike me! But it was worth it what can I say.

Oh and if you’re one of those “I hate fruitcake and fruit mince pies people”…. What on earth are you doing reading this?! Bugger off and read something else would you?! I don’t need that kind of negativity in my life! haha This goes for my husband too, who complains non stop that I’m cooking fruit AGAIN. Apparently my time would be better spent making something HE eats. Well phooey to him and phooey to the haters! I’m going sit here with my bowl of warmed up fruit mince pie and custard and enjoy myself! Now one of the key factors in making a beautiful gluten free fruit mince pie, is using a melt-in-your mouth pastry. Like mine, which you can find here! But the other key is rolling it out very thin. You want delicate, not clunky. So just keep flipping and rolling out that pastry until it’s just thin enough. Be sure to roll it out on a floured piece of baking paper too, it makes the whole process easier. Not to mention cutting out your shapes is a cinch.

Now hop in the kitchen. My surprisingly simple, seriously delicious, ultimately Christmassy Gluten Free Fruit Mince Pies are not to be missed! Christmas really has come early! With my Gluten Free Fruit Mince Pies you won't have to miss out any more! Of course they must be slathered in brandy custard and served to Christmas carols, but hey, we're not judging! 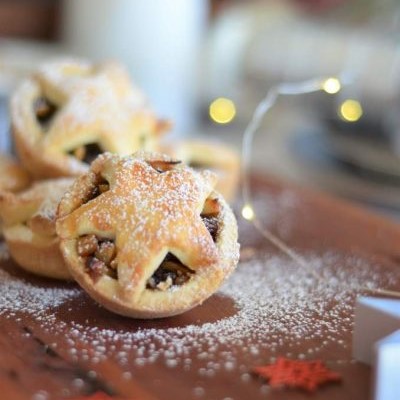 - Jump over to get my Gluten Free Shortcrust pastry recipe here

- You can simply buy a box of Sunbeam Mixed Dried Fruit from your local supermarket to make life easier here. There's no need to buy copious amounts of ingredients that you might not otherwise use. However, if you're not a fan of candied lemon and orange peel then I suggest making up your own mixture.

- To make your own dried fruit mixture simply mix up Sultanas, Raisins, Currants and Glace Cherries in which ever quantities you prefer. I generally opt for 100g of sultanas, raisins and currants and 75g of cherries.